Diabetes mellitus (DM) has become an increasingly common disease with high disability and mortality rates. Diabetes complications are the main cause of diabetes death and about 50% of diabetic patients died from heart disease in developed countries reported by World Health Organization. Diabetic cardiomyopathy (DCM) has been considered as a high incidence and serious complication of DM and plays a key role in the incidence and development of diabetes related heart failure. Metabolism dysregulation is regarded as an important and earlier factor occurred in the pathogenesis of DCM. Insulin resistance, oxidative stress, inflammation and mitochondrial dysfunction also contribute to the development of DCM. Farnesoid X Receptor (FXR) is a member of nuclear receptor superfamily, and plays a critical role in regulating lipid and glucose metabolism, oxidative stress and inflammation. FXR is activated by primary bile acids (BAs) such as chenodeoxycholic acid, cholic acid and synthetic agonists such as obeticholic acid. BAs are the main active ingredients of many natural products and traditional medicines, especially bile or gallstones in animals, such as calculus bovis. Due to the regulatory effect of FXR on glucose and lipid metabolism, oxidative stress and inflammation, the treatment of BAs and FXR agonists for metabolic syndrome and DCM have gained more attention. This review will focus on the pathogenesis of diabetic cardiomyopathy and the regulatory effect of BAs and FXR on DCM. 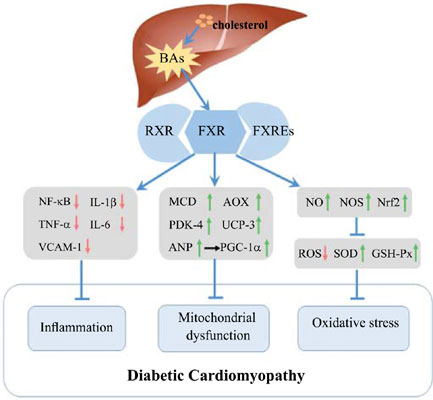