α1-acid glycoprotein (orosomucoid, AGP) is an Acute Phase Protein produced by liver and peripheral tissues in response to systemic reaction to inflammation. AGP functions have been studied mostly in human, cattle and fish, although the protein has been also found in many mammalian species and birds. AGP fulfils at least two set of functions, which are apparently different from each other but in fact intimately linked. On one hand, AGP is an immunomodulatory protein. On the other hand, AGP is one of the most important binding proteins in plasma and, beside modulating pharmacokinetics and pharmacodynamics of many drugs, it is also able to bind and transport several endogen ligands related to inflammation. The focus of this review is the immunomodulatory activity of AGP. This protein regulates every single event related to inflammation, including binding of pathogens and modulating white blood cells activity throughout the entire leukocyte attacking sequence. The regulation of AGP activity is complex: the inflammation induces not only an increase in AGP serum concentration, but also a qualitative change in its carbohydrate moiety, generating a multitude of glycoforms, each of them with different, and sometimes opposite and contradictory, activities. We also present the most recent findings about the relationship between AGP and adipose tissue: AGP interacts with leptin receptor and, given its immunomodulatory function, it may be included among the potential players in the field of immunometabolism. 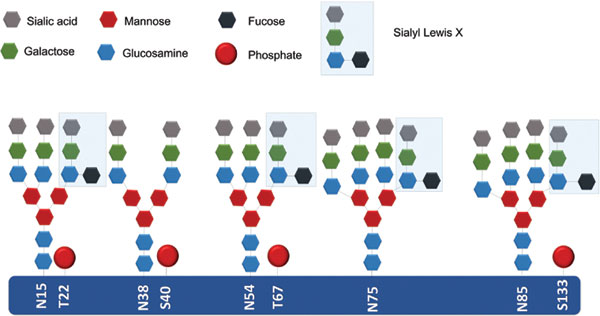