Polymorphism is a specific feature of the amyloid structures. We have studied the amyloid structures and the process of their formation using the synthetic and recombinant preparations of Aβ peptides and their three fragments. The fibrils of different morphology were obtained for these peptides. We suppose that fibril formation by Aβ peptides and their fragments proceeds according to the simplified scheme: destabilized monomer → ring-like oligomer → mature fibril that consists of ringlike oligomers. We are the first who did 2D reconstruction of amyloid fibrils provided that just a ringlike oligomer is the main building block in fibril of any morphology, like a cell in an organism. Taking this into account it is easy to explain the polymorphism of fibrils as well as the splitting of mature fibrils under different external actions, the branching and inhomogeneity of fibril diameters. Identification of regions in the protein chains that form the backbone of amyloid fibril is a direction in the investigation of amyloid formation. It has been demonstrated for Aβ(1-42) peptide and its fragments that their complete structure is inaccessible for the action of proteases, which is an evidence of different ways of association of ring-like oligomers with the formation of fibrils. Based on the electron microscopy and mass spectrometry data, we have proposed a molecular model of the fibril formed by both Aβ peptide and its fragments. In connection with this, the unified way of formation of fibrils by oligomers, which we have discovered, could facilitate the development of relevant fields of medicine of common action. 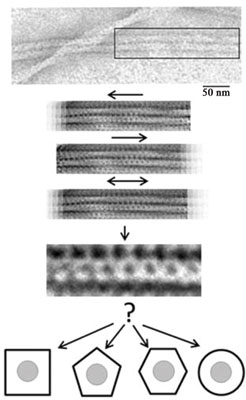