The Enthalpy-entropy Compensation Phenomenon. Limitations for the Use of Some Basic Thermodynamic Equations


The thermodynamic analyses of proteins, protein-ligands and protein-nucleic acid complexes involves the entropy–enthalpy (S-H) compensation phenomenon. We have examined the question whether the observed compensation is artificial or reflects anything more than the well-known laws of statistical thermodynamics (so-called extra-thermodynamic compensation). We have shown that enthalpy− entropy compensation (EEC) is mainly the trivial consequence of the basic thermodynamic laws and there are no experimental evidences for existence of the extra-thermodynamic compensation. In most cases EEC obtained in the experiments through the plot enthalpies (ΔH) and entropies (TΔS) versus one another is meaningless due to the large correlated errors in ΔH and TΔS, unless special measures are taken to minimize, quantify and propagate these errors. Van’t Hoff equation can be used for entropy calculation in limited cases when enthalpy is measured in independent experiments. Eyring equation cannot be used for calculation of entropy in any case and should be excluded from scientific use. Both equation, Van’t Hoff and Eyring cannot be used for simultaneous calculation of the enthalpy and entropy values using one set of data. All the data obtained in this way should be recognized as erroneous. 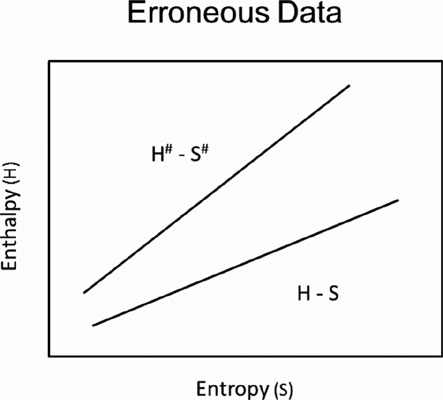