Alzheimer’s disease (AD) is a progressive brain disorder and one of the most common causes of dementia and death. AD can be of two types; early-onset and late-onset, where late-onset AD occurs sporadically while early-onset AD results from a mutation in any of the three genes that include amyloid precursor protein (APP), presenilin 1 (PSEN 1) and presenilin 2 (PSEN 2). Biologically, AD is defined by the presence of the distinct neuropathological profile that consists of the extracellular β-amyloid (Aβ) deposition in the form of diffuse neuritic plaques, intraneuronal neurofibrillary tangles (NFTs) and neuropil threads; in dystrophic neuritis, consisting of aggregated hyperphosphorylated tau protein. Elevated levels of (Aβ), total tau (t-tau) and phosphorylated tau (ptau) in cerebrospinal fluid (CSF) have become an important biomarker for the identification of this neurodegenerative disease. The aggregation of Aβ peptide derived from amyloid precursor protein initiates a series of events that involve inflammation, tau hyperphosphorylation and its deposition, in addition to synaptic dysfunction and neurodegeneration, ultimately resulting in dementia. The current review focuses on the role of proteomes in the pathogenesis of AD. 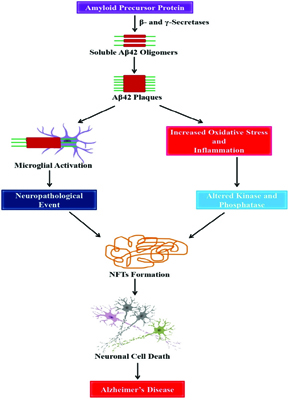