The Interplay Between Depression and Parkinson´s Disease: Learning the Link Through Ca2+/cAMP Signaling


Background: Parkinson´s disease (PD) and depression have an interplay at multiple cellular levels, a phenomenon which is translated into clinical data showing that depressive patients presented an enhanced risk for developing PD. The pathogenesis of both diseases is under intensive debate as correlated to dysregulations related to Ca2+ signaling.

Objective: Then, revealing this interplay between these diseases may provide novel insights into the pathogenesis of them. Methods: Publications involving Ca2+ signaling, PD and depression (alone or combined) were collected by searching PubMed and EMBASE. Results: Not surprisingly, calcium (Ca2+) channel blockers (CCBs), classical antihypertensive medicines, have been demonstrated off-label effects, such as alleviating both PD and depression symptoms. Discussion: A mechanism under debate for the antiparkinsonism and antidepressant effects associated to CCBs is focused on the restoration of Ca2+ signaling dysregulations. In addition, previous studies have observed that CCBs can affect Ca2+/cAMP signaling. Conclusion: Thus, this article discussed the role of Ca2+/cAMP signaling in the interplay between depression and PD, including the implications for the pharmacotherapy involving CCBs. 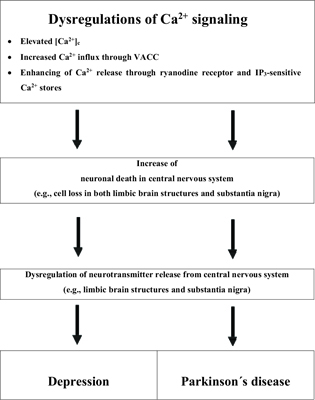