Medical and Veterinary Importance of the Moonlighting Functions of Triosephosphate Isomerase


Triosephosphate isomerase is the fifth enzyme in glycolysis and its canonical function is the reversible isomerization of glyceraldehyde-3-phosphate and dihydroxyacetone phosphate. Within the last decade multiple other functions, that may not necessarily always involve catalysis, have been described. These include variations in the degree of its expression in many types of cancer and participation in the regulation of the cell cycle. Triosephosphate isomerase may function as an auto-antigen and in the evasion of the immune response, as a factor of virulence of some organisms, and also as an important allergen, mainly in a variety of seafoods. It is an important factor to consider in the cryopreservation of semen and seems to play a major role in some aspects of the development of Alzheimer's disease. It also seems to be responsible for neurodegenerative alterations in a few cases of human triosephosphate isomerase deficiency. Thus, triosephosphate isomerase is an excellent example of a moonlighting protein. 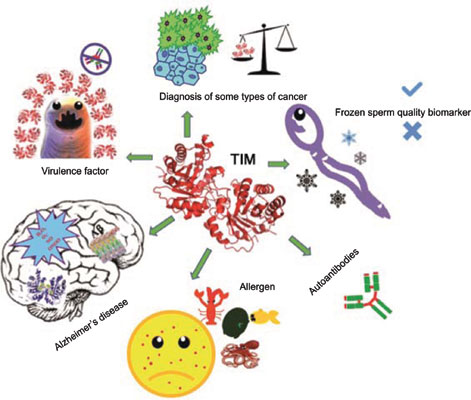