Celiac disease (CD) is an inflammatory syndrome that affects mainly the intestine, but also other organs. This ailment is also affected by the physicochemical behavior of gluten as such. From the medical standpoint, this pathology results from a combination of genetic and environmental factors. At the same time, gliadin (the alcohol-soluble fraction of gluten) along with other related oligomers, such as 33-gliadin, present high immunogenicity and are responsible for triggering of this disease. Within CD characterization, there are mainly two different approaches to carry out this study; one focuses on its chronic phase, while the other deals with its initial stages. Although the chronic phase of CD has been well characterized, the initiation of the inflammatory process is still unclear. As this process is apparently related to the aggregation of the oligomers involved in CD, the initiation of the disease could be explained by means of clarifying their self-assembly behavior. Thus, this work addresses the clinical explanation, within the chronic approach, attempting to combine it with the physicochemical techniques used for characterization of proteins aggregates as well. 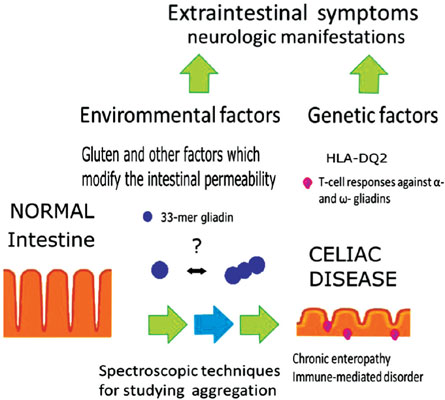