Alpha synuclein (α-syn) belongs to a class of proteins which are commonly considered to play a detrimental role in neuronal survival. This assumption is based on the occurrence of a severe neuronal degeneration in patients carrying a multiplication of the α-syn gene (SNCA) and in a variety of experimental models, where overexpression of α-syn leads to cell death and neurological impairment. In these conditions, a higher amount of normally structured α-syn produces a damage, which is even worse compared with that produced by α-syn owning an abnormal structure (as occurring following point gene mutations). In line with this, knocking out the expression of α-syn is reported to protect from specific neurotoxins such as 1-methyl, 4-phenyl 1,2,3,6-tetrahydropyridine (MPTP). In the present review we briefly discuss these well-known detrimental effects but we focus on findings showing that, in specific conditions α-syn is beneficial for cell survival. This occurs during methamphetamine intoxication which is counteracted by endogenous α-syn. Similarly, the dysfunction of the chaperone cysteine-string protein- alpha leads to cell pathology which is counteracted by over-expressing α-syn. In line with this, an increased expression of α-syn protects against oxidative damage produced by dopamine. Remarkably, when the lack of α-syn is combined with a depletion of β- and γ- synucleins, alterations in brain structure and function occur. This review tries to balance the evidence showing a beneficial effect with the bulk of data reporting a detrimental effect of endogenous α-syn. The specific role of α-syn as a chaperone protein is discussed to explain such a dual effect. 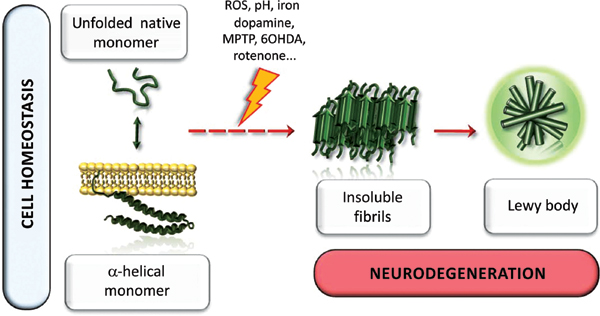