Players in ADP-ribosylation: Readers and Erasers


ADP-ribosylation describes an ancient and highly conserved posttranslational modification (PTM) of proteins. Many cellular processes have been identified that are regulated by ADP-ribosylation, including DNA repair, gene transcription and signaling processes. Enzymes catalyzing ADP-ribosylation use NAD+ as a cofactor to transfer ADP-ribose to a substrate under release of nicotinamide. In mammals extracellular and intracellular enzymes have been described. ADP-ribosylation is catalyzed by ADP-ribosyltransferases (ARTs) and some Sirtuins. Extracellular and intracellular ARTs belong to the cholera toxin-like (ARTC) and the diphtheria toxin-like (ARTD) subclass, respectively. ARTDs can be further subdivided depending on their ability to either generate poly-ADP-ribose chains, or to mono-ADP-ribosylate substrates. Similar to the latter, ARTCs and Sirtuins are restricted to mono-ADP-ribosylation. Recent findings have provided information about the functional consequences of ADP-ribosylation. Analogous to other PTMs, ADP-ribosylation can exert allosteric effects on enzymes, thereby controlling their catalytic activity. Moreover, this PTM can be read by multiple protein motifs and domains mediating protein-protein interactions. Typically these readers can distinguish between mono- and poly-ADP-ribosylation. Furthermore, with the description of proteins that can erase ADP-ribosylation, this posttranslational modification is fully reversible and thus provides an additional mechanism to transiently control protein functions and networks. In this review we will describe the most recent findings on motifs and domains that are related to ADP-ribosylation processes with a particular focus on readers and erasers. These new findings provide evidence for broad functional roles of ADP-ribosylation and a high diversity of mechanisms that contribute to the downstream consequences of this modification. 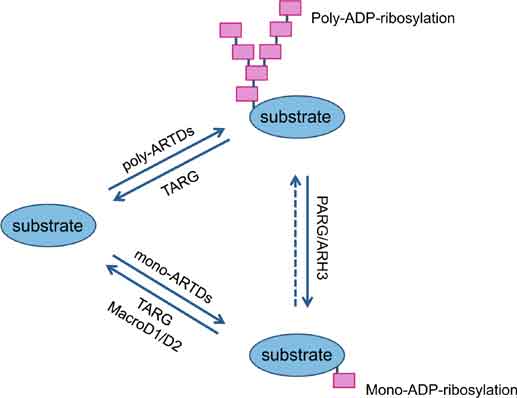