Exosomes are small vesicles that are released from a variety of cells and are involved in cell-to-cell communication. In humans, exosomes are detected in the plasma, urine, saliva, and cerebrospinal fluid. These vesicles carry multiple cargo proteins, as well as microRNA that affect the transcription of target genes. During cancer progression, secretion of exosomes increases. As such, proteins and microRNAs released from exosomes in cancer patients can be used as biomarkers for cancer diagnosis and progression. Yeast is an excellent model system to study trafficking of small vesicles in and out of the cells. When yeast cells are grown in low glucose, small vesicles transport gluconeogenic enzymes to different locations. In the cytoplasm, they exist as free vesicles and aggregated clusters. They are also secreted and account for more than 90% of total organelles in the extracellular fraction. When glucose is added to prolongedstarved cells, extracellular vesicles are endocytosed resulting in a dramatic decrease in vesicles in the extracellular fraction and the appearance of vesicle clusters in the cytoplasm. Internalization also leads to a rapid decline in protein levels for vesicle-associated proteins in the extracellular fraction. Using large-scale proteomics/secretomics, more than 300 proteins that were secreted into the extracellular fraction/periplasm were identified. They showed distribution patterns similar to gluconeogenic enzymes. They were secreted during glucose starvation and their levels in the extracellular fraction decreased following glucose re-feeding. Multiple techniques have been used to study the biogenesis, clustering, secretion, and internalization of vesicles in yeast. 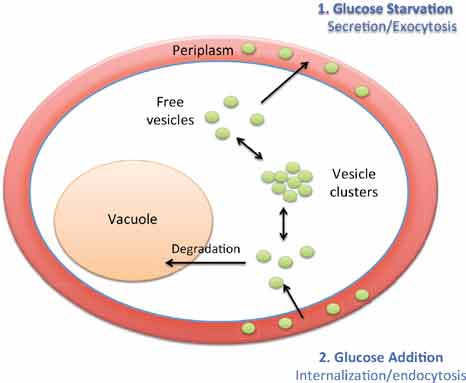