Arginine, the most basic among the 20 amino acids, occurs less frequently than lysine in proteins despite being coded by six codons. Only a few important proteins of biological significance have been found to be abundant in arginine. It has been established that these arginine-rich proteins have been assigned important roles in the biological systems. Arginine-rich cationic proteins are known to stabilize macromolecular structures by establishing appropriate interactions (salt bridges, hydrogen bonds and cation-π interactions). These proteins are also known to be the key members of many regulatory pathways such as gene expression, chromatin stability, expurgation of introns from naïve mRNA, mRNA splicing, membrane-penetrating activity and pathogenesis-related defense, to name a few. Further, arginine occurs in various combinations with other amino acids (serine, lysine, proline, tryptophan, valine, glycine and glutamic acid) which diversify the potential functions of arginine-rich proteins. Arginine-rich proteins known till date from dietary sources have been described in terms of their structure and functional properties. A variety of activities such as bactericidal, membrane-penetrating, antimicrobial, anti-hypertensive, pro-angiogenic and others have been reported for arginine-rich proteins. This review attempts to collate the occurrence, functions and the biological significance of this unique class of proteins rich in arginine. 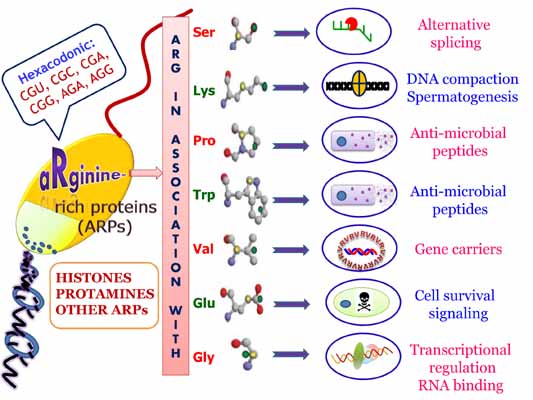