This article opens a series of reviews on the abundance and roles of intrinsic disorder in milk proteins. The focus of this introductory article on caseins is symbolic, since caseins were among the first recognized functional unfolded proteins and since they are definitely the most disordered, the most abundant, and the most studied of all milk proteins. In eutherian milks, the casein family includes at least three and usually four major members (αs1-, αs2-, β-, and κ-caseins) that are unrelated in sequence. However, in some species, two different αS2-casein genes are active, and therefore the total number of caseins can be as high as five. These proteins have found a number of uses in food industry. The functional repertoire of caseins ranges from nutritional function to involvement in the improving and/or maintaining cardiovascular health, to crucial contribution to the milk capacity to transport calcium phosphate, to serve as molecular chaperones, and to protect the mother’s mammary gland against amyloidoses and ectopic calcification. An intricate feature of caseins is their ability to assemble to colloidal protein particles, casein micelles, serving to sequester and transport amorphous calcium phosphate. These and many other functions of caseins are obviously dependent on their intrinsically disordered nature and are controlled by various posttranslational modifications. Since various aspects of casein structure and function are rather well studied and since several recent reviews emphasized the functional roles of caseins’ intrinsic disorder, the major goal of this article is to show how intrinsic disorder is encoded in the amino acid sequences of these proteins. 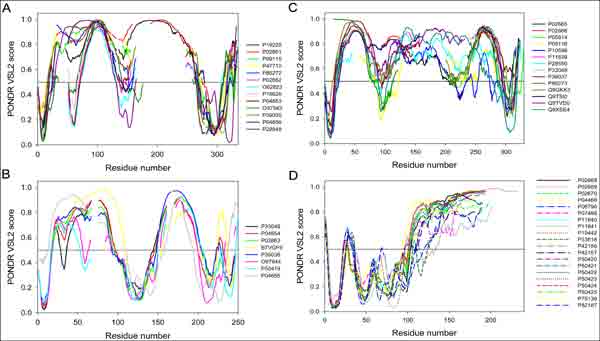