Relationship Between Na+, K+-ATPase and NMDA Receptor at Central Synapses


Specific receptors for classical neurotransmitters and neuropeptides, as well as the Na+, K+-ATPase, are all molecular entities inserted into synaptic region membranes and localized contiguously. Herein, available experimental evidence showing close interactions between the activity of the Na+, K+-ATPase and the N-methyl-D-aspartate (NMDA) ionotropic glutamate receptor was reviewed, supporting a functional link between these macromolecules. The Na+, K+- ATPase and NMDA receptor are involved in ion movements through membranes. The former acts as an ion transporter, whereas the latter acts as an ion channel. The modulation of their activity plays a critical role in controlling neuronal function. Examples were taken from studies performed with specific agonists or antagonists of the NMDA receptor. Regarding the Na+, K+-ATPase, its involvement was postulated after observing its inhibition by ouabain or related cardiac glycosides. Additionally, experimental conditions known to prevent normal Na+, K+-ATPase (i. e., sodium pump functioning) led to similar valuable information. These findings indicate potential cross-talk between this enzyme and the NMDA receptor. The Na+, K+-ATPase and NMDA play very important roles in the regulation of learning and memory in the hippocampus. The fact that important changes here described were recorded in the hippocampus indicate a different vulnerability of this area to toxicity induced by the Na+, K+-ATPase inhibitor ouabain. Some interesting relationships include calcineurin actions, the participation of ERK or Src family kinases, and signaling cascades initiated by calcium. At present, many other examples of signaling related to the NMDA receptor cannot be correlated with Na+, K+-ATPase activity. It is desirable that the development of future research offer new clues for the relationship between Na+, K+-ATPase and NMDA receptor activation. 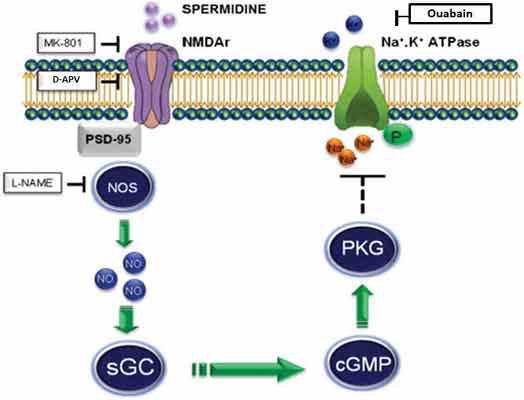